In a previous blog we discussed app permission policy and recommended settings for general users. These recommendation included blocking users from uploading and publishing apps in Teams store, as part of security and compliance measures. In this blog we will talk about setting up special policy for developers who are working on apps for your organization, assuming that recommended restrictive policies are implemented for all users. These developers will need to have a policy that enables them to upload apps from Teams for testing and publishing. Alternately, the Teams Admin can also upload apps from the Teams Admin Console. However, it might be necessary to give app developers ability to upload apps so that they can perform necessary testing.  Also, note that, this blog discusses only the app permission and setup policy for uploading apps, the steps for uploading apps are out of scope for this blog.

The methods to upload and test a custom app are following:

In general, you need to setup polices that gives the developers both options. If the app has some feature that cannot be modified using App Studio then the developer may need to use “side loading” to upload the app.

The settings for Microsoft Apps does not impact the developers – you should keep this setting same as the policy for rest of users.

Most developers use “App Studio” to upload and update their apps. In that case, first, make sure that, third-party apps are allowed in the org-wide settings.

Search for “App Studio” -> Select the option to “Add” the app studio app -> then select “Allow”. 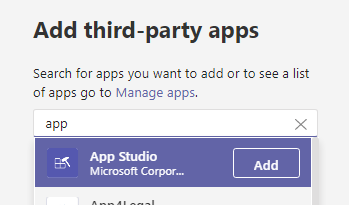 Custom apps should be set to “Allow all apps” assuming the app your developers are working on is a custom app.

Sideloading is a method to directly upload a custom app to the Teams store. Your administrator will still need to approve the app and potentially modify policy to allow the app for all users.  The app permission policy need to allow custom apps for this policy to work properly.

Make sure the first option “Upload Custom Apps” is turned “On” for this policy.

This will give the user (developer) the option to upload the app files using Teams Store from the Teams client application.

After you create these two policies, make sure to assign the polices only to those users who will be developing and testing the custom apps. You need to assign both the app permission policy and app setup policy.

After development phase is done, if you want to include pilot users for beta testing, you can create a new app permission policy that allows this app but does not allow the users  to upload a custom app or have access to app studio. Therefore, you need to create a new app permission policy. The users can still have the general users app setup policy.

The settings for Microsoft Apps remains the same for pilot users.

This setting also remain the same as the policy for general users – pilot users do not need access to “App Studio” for beta testing.

This is where the you need to set it up so that, beta users have access to the custom app. Prior to setting this up, make sure the custom app is approved and published in the team store.

Apply this policy to all the pilot users who will be testing the custom app.

You can create a Team called something like “Beta testing Team” and a “Pilot users” Channel so that pilot users can discuss their test results. Developers or Admins can also help the pilot users using this channel.

We Use Cookies
To provide the best experiences, we use technologies like cookies to store and/or access device information. Consenting to these technologies will allow us to process data such as browsing behavior or unique IDs on this site. Not consenting or withdrawing consent, may adversely affect certain features and functions.
Manage options Manage services Manage vendors Read more about these purposes
View preferences
{title} {title} {title}